Earl and Alexis were featured in the ensemble of this seminal production at San Francisco Opera, which is likely to become a reference recording for some time. A classic of American musical theater, this tale of life on the Mississippi River from the 1880s to the 1920s is both a poignant love story and a powerful reminder of the bitter legacy of racism. Director Francesca Zambello’s grand-scale production is “a triumph-a stylish, fast-paced and colorful show that had the capacity audience on its feet, cheering loud and long” (Chicago Classical Review). The magnificent Jerome Kern-Oscar Hammerstein II score, which includes such classic songs as “Ol’ Man River,” “Can’t Help Lovin’ Dat Man,” “Make Believe” and “You Are Love,” will sound glorious “under the authoritative baton of music-theater maestro John DeMain” (Chicago Tribune). 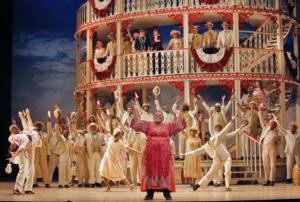